In the few recipes I have posted, and of course when needed, I always use stewed tomatoes as a rule. The reason is quite simple: stewed tomatoes are sweeter, non acidic and taste better. If you can do some at home when in season, then you are in the right track. You can can as many as you want and use them through the year... the flavor is way better than anything that I have tried.

You can jar (I was going to write can-can, but it just sound funny) as much or as little as you want.

Here where I live tomatoes are usually expensive or they have been pre-frozen... not good. If desperate, then I use canned stewed tomatoes from the supermarket, I just verify the contents... if the first ingredients listed are tomatoes, onions, peppers and celery... then we are game, otherwise they are labeled as "stewed tomatoes" but God knows what is in the can. Always read the labels! 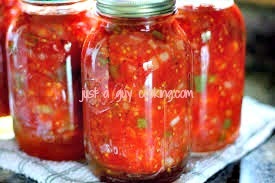 * Tomatoes should be Roma, beefsteak or better boy.

1. Sanitize the canning jars -they can be 500 ml or 250 ml-. This means that you can put them in the dishwasher in the sanitize cycle, lids and all OR submerge them in boiling water for 10 minutes. Then put them in a cooling rack to dry.

2. Prepare a medium pot with water and put it to boil. Also prepare a bowl of ice water (I leave some ice in it).

3. We are going to remove the skins first. In a pot with boiling water put the tomatoes for no more than a minute and immediately plunge them into the iced water bowl. With this basically you just got rid of the skins. We don’t want skins on the tomatoes as it makes them a bit bitter and not so smooth.

4. Once the skins have been removed, we are going to cut the tomatoes in quarters and we are going to remove the tough part around the stem (white) and any soft or bruised parts. Reserve

5. Chop the onion , celery and pepper -medium to fine- and reserve.

6. In a large pot combine the tomatoes, celery, onion, pepper, sugar (or honey) and salt but NOT the lemon juice. Cover and cook in a medium heat for 10 minutes stirring often.

8. Once the tomatoes are ready, fill each jar within 1” of the top. If you spill some, don’t worry, just clean it with a clean cloth so we get a good seal.

10. Put the lids on and screw them snugly but not tight. Clean any spills.

11. Put the jars in the pressure cooker which should have about 3” of water and the metal rack on the bottom -the one with the holes-. If you don’t have a pressure cooker, then fill a large pot with water, put something in the bottom to avoid that the jars are in direct contact with the pot (believe it or not, sometimes I put some marbles in the bottom and then a large dish…that does it)

12. Let the pressure cooker steam following the manufacturer’s instructions. Once steaming let it steam for 15 minutes or so. If you are doing it with a regular pot, let it boil for 20 minutes in high heat.

13. Once we have completed the steaming/boiling part we are going to let the pressure cooker cool down on its own (again, follow the manufacturer’s instructions) and if you are doing it with a pot, then remove the jars using the appropriate canning tongs -careful… the jars will be slippery and extremely hot! and remove them from the hot water and allow them to cool down in a non drafty area overnight.

14. Verify that all have sealed as intended (the lid has sucked down). Do the final check: press the center of the lid with your finger and if it pops down…then it’s not sealed. Don’t trow it though…put them in the fridge and use them later on.

15. Your stewed tomatoes are ready. Don’t panic if you see tomatoes floating above the liquid…it’s normal. If they are half-full also don’t worry, that means that you packed the tomatoes too tight but they still are 100 perfect to eat months and months later.