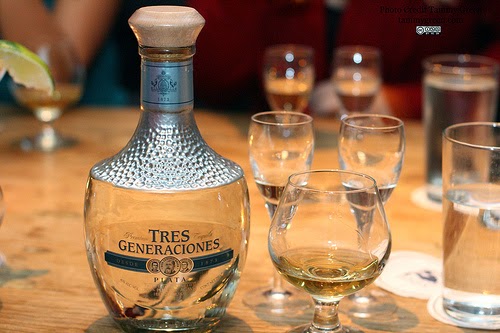 The people that knows me are quite aware that I really like my tequila. I have been drinking tequila since I was in age of doing so legally (you have to believe me, what else can you do?). Way back then tequila was a poor man drink but somehow I liked it.

I remember clearly going Fridays night with my friends -yes...back then I had friends- and everybody would ask, most likely for a Cuba Libre (Rum with Coke) but I always asked for tequila. My friends always thought that I was just being eccentric and the waiters though that I was cheap. I was neither. I just liked tequila.

What was poor man drink 40 years ago...now is a fashionable drink and, if you have the money, then you can easily pay hundreds of dollars for a tequila shot. Hundreds! I don't though, I drink good tequila and sometimes what I drink is a bit expensive and some other times it is not.

I just finished a tequila given to me by my mother in law (my biggest supplier) during my last trip to Mexico. It was a Tres Generaciones Reposado. I opened the bottle yesterday and today is gone (just Kidding!!). This was a good tequila. I would say a great tequila.

This particular tequila has been distilled three times (the norm for a Reposado is two) and it has been aged for at least 4 months in oak barrels. It is soft, nice to the palate. I did really enjoyed quite a bit.

The flavor is defentely agave with a tone of oak and pepper...I would say a bit sweet. definitely doesn't have the kick that other tequilas have. As I drink it only straight, I appreciate the silky and smooth experience.

If I were to give stars I would give Tres Generaciones a 7 stars out of 10.

Email ThisBlogThis!Share to TwitterShare to FacebookShare to Pinterest
Labels: tequila