I am not a huge fan of fusion cousine as I believe that dishes have been created as a perfect mix of flavors, texture, temperature and...culture. A dish created, for example in France, talks about their culture, their dedication to cousine, the produce they naturally have and their unique sense of what food is all about.

But...there are exceptions and I do enjoy these quite a bit, for example this fantastic dish: the mix of huitlacoche, a fungus that is a parasite that grows in corn and Italian pasta. Mexicans (the ones who discovered that huitlacoche was edible -go figure how or why they did that- and Italians, pasta making masters. The combo is absolutely fantastic and has a flavor like you have never experienced before...is not sweet nor tangy but creamy and has this truffle flavor that has no parallel.

As we live in Canada, huitlacoche doesn't grow here and I find scary the thought of bringing fresh huitlacoche from Mexico and trying to explain it to a customs officer, so I resource to can huitlacoche (that is labeled "cuitlacoche" for some reason beyond my understanding). The rest is in the recipe...

The wife wanted pasta yesterday and, me being such a good husband, I decided to treat her with tho of her favorite foods: huitlacoche and pasta. She loves the black fungus in quesadillas and in soup but have never tried on pasta, which I have seen somewhere before, so I decided to cook this absolutely different and super tasty dish. I hope you like it as much as we did.

This gnarly, gray-black corn fungus long-savored in Mexico has nutritional values similar to those of the corn on which it grows. Test results published in the journal Food Chemistry reveal that an infection that North American farmers and crop scientists have spent millions trying to eradicate, is packed with unique proteins, minerals and other nutritional goodies..and has more economic value than the corns it ruins.

Huitlacoche can actually synthesize significant nutrients that don't even exist in corn," so the fantastic flavor is just a bonus.

This epicurean wonder is an exquisite delicacy both nutty and earthy with a hint of fruity sweetness.

When huitlacoche attacks corn, the insidious-looking pustules that bubble up don't just force the husk to explode, it forces the metabolical process inside the cob to change, creating new, healthier nutrients, for example  lysine, one of those "essential amino acids" that the body requires but can't manufacture. We need it to fight infections and strengthen bones. Bodybuilders pound lysine when they want to build muscle, and estheticians recommend it to keep skin looking young (in that case I need to eat it every day as I am not fit nor handsome).

It just happens that corn has virtually no lysine; huitlacoche is loaded with it. It also is packed with more beta-glucens – the soluble fiber that gives oatmeal its well-known cholesterol-cutting power – than, well, oatmeal.

You can eat it at  James Beard House in New York City, for example but also you can find it in huitlacoche stuffed chicken breasts at La Cocina Michoacana in Cedar Park, Texas; huitlacoche quesadillas at Tu y Yo in Boston; and at La Casita Mexicana in Los Angeles, they blend the huitlacoche into a tamale masa, then stuff the entire tamale into a large, roasted chili. 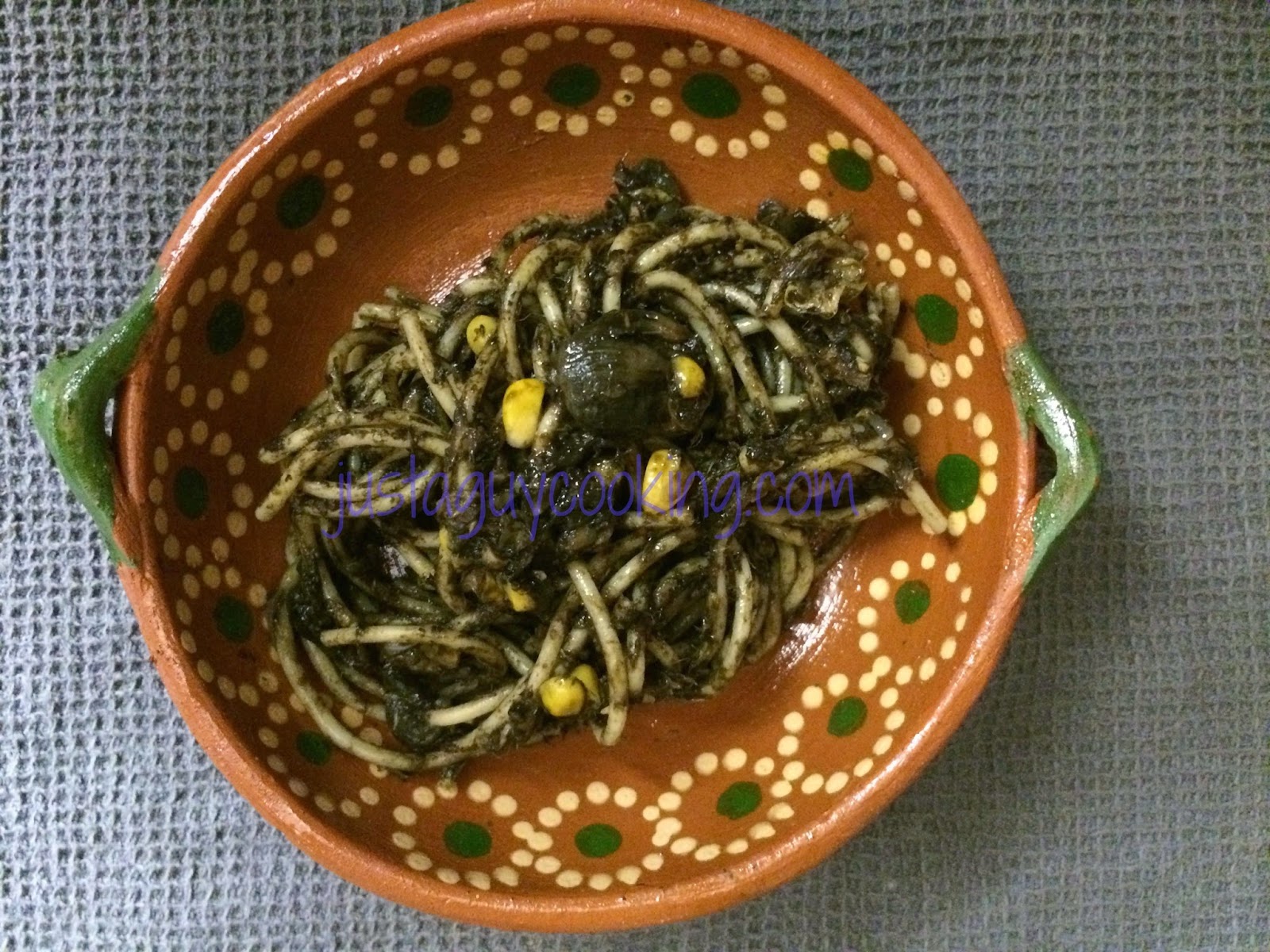 1 Flaked Tuna in water can

1 Small can of sweet corn

1. In a medium size pot, heat the olive oil and cook the onion until translucent and then add the chopped garlic. Reduce heat.

2. Drain the water from the tuna can and then add to the onion mix. Bring heat to medium high and fry the tuna until a bit golden (fully cooked…a bit brown)

3. Add the stewed tomatoes and mash them a bit so it incorporates to the mix -but we want it a bit chunky-. Reduce heat and let it cook, covered, for 15 minutes.

4. Add the huitlacoche* to the sauce and stir until incorporated, then add the corn and stir again. Cover and allow it to simmer for another 15 minutes (covered).

5. In a big pot, heat water and then cook the pasta for about 10 minutes or until is “al dente” (the pasta is semi-soft but the center is a bit uncooked). I never add oil nor salt to my pasta when cooking it…so far no problems there. Once the pasta is cooked, remove from the heat, strain it under cold water and drain perfectly. Return the pasta to the already drained big pot.

6. Add the huitlacoche sauce to our pasta and stir until coated evenly.

7. Serve and top with parmesan cheese.

Even though is a fungus that grows on corn, it is black and looks quite suspicious, huitlacoche is not only tasty for is good for you.

This black fungus (Ustilago maidis) is a parasite of the corn. The word comes from the nahuatl “huitla” which means excrement and “cochi” that means pig. The scientific name comes from “ustilare” -to burn- and “taino mahis” that means corn.. keep in mind that what, even though the meaning of the name is not appealing, the flavor and the nutritional value are amazing.

Nahuatl was the language of the Mexicas also known as Aztecs, and it is still spoken in small rural areas around Mexico City.