This is the thing. I like cherries and... I enjoy a good drink -I guess to forget how the current wife gives me the cold shoulder-. Most of the time I drink Tequila but sometimes I will prepare some sort of cocktail (nothing with fruit juices ... pleeeaaassseee!) and when I add the nice looking cherry...it just tastes like, well... candy. It is candy though. The contemporary and industrialized idea of what one should consider a Maraschino Cherry.

The original maraschino cherries were quite small, super-sour wild Marasca cherries from the eastern shores of the Adriatic. These cherries were pickled in sea water and preserved in maraschino, a local cordial made from the same fruit and other herbs. In the 19th century, maraschino cherries were such a rich person's delicacy that The United States' Food and Drug Administration started protecting the real Maraschino Cherries in 1914, requiring all pretenders to employ the word "imitation" on labels for the ones not actually made the proper way with the proper ingredients.

During Prohibition, Americans had to improvise on the maraschino cherry and lose the booze. The neon-red thingies that we Americans equate with hot-fudge sundaes and kiddie cocktails are domestic cherries (usually Queen Anne) dyed and packed in almond-flavored sugar syrup. By the 1940s, the Day-Glo variety had infiltrated the American palate to the point that the FDA actually changed its definition of a maraschino cherry to include this humiliated, flavorless imitation of a treat.

But, being a man that I am and such a traditionalist, I decided to do my own. I researched and researched and... once I had four or five recipes that made sense I created my own.

The first obstacle was to find Luxardo: the original Maraschino liquor. In my small town they look at you as if you are on dope or something when you ask for it in the Liquor Store. The Canadians and the Italian liquor are just not a match. I looked and looked for all last Summer. Eventually I got a bottle...

The end result is a fantastic taste Maraschino cherry but, the price I paid is that my cherries are not red-super red-mega red cherries that one gets in any bar...but I rather go for the flavor than for looks. I just can taste these in any real cocktail and... why not... with vanilla ice cream as an afternoon dessert.

The current wife is distracted with some "cochinitos de piloncillo" that I baked on her request. One of the many many traditional sweet bread that you can buy in a real panaderia. If you want I might even post the recipe, just let me know. I will have to bake them again as the wife has already eaten the 36 I baked... yesterday... I know... 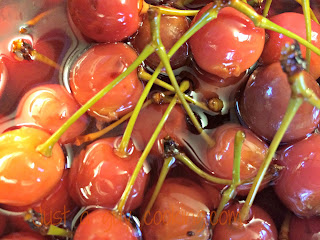 1. Pitt the sour cherries after washing them. I pitt them sideways as I like to keep the stem.

2. In a medium size pot put the cherries, the Luxardo and the sugar and bring it to a quick boil. Remove immediately from the heat and put them into a medium size metal bowl.

3. Allow the mix to cool and then cover it with plastic wrap. Put in the fridge for 24 hours.

4. After the 24 hours, mix the cherries with the juice (Luxardo now in a kind of syrup). By now the cherries look a bit pale; it’s OK (unless you want them bright and red in which case go to the store and buy some). Cover and put back in the fridge for another 24 hors.

5. Repeat the last stem and put back in the fridge. The juice will look redder and the cherries paler. It’s OK. By now you can try a cherry … it should taste fantastic and quite alcohol charged. Not a kiddie stuff.

6. On the 4th day, mix again the juice with the cherries and jar them (I jar them in small jars as I can use them for cocktails without risking unnecessary spoilage. In a jar they last quite a bit (couple of years!) but once opened… about a month in the fridge.

7. Enjoy!…with any cocktail or with grown-up desserts. Unless you want your child to learn the intricate world of alcoholic beverages… give him/her the store bought ones….