While the current wife was away taking a course on how to I don't remember what (and I do pay attention!) I decided that it was a good time to keep learning how to use my Anova Sous Vide machine.

I went to my local supermarket where they sale non local food (...sounds familiar?) and bought fresh Mexican shrimp. I bought the Mexican kind because they were a good size and...on sale. On sale is one of my favorite expressions. As I had purchased a good mezcal in my last trip to Mexico I decided to try this recipe from Emily Farris. As usual I modified the recipe to accommodate to my own taste and to avoid a flare-up (Chron's).

The mezcal is an interesting story. Way back then, when I was young, smart and beautiful -last Century- I used to go to have a drink with my University friends or with my super good friend Jaime. Before that actually I never went to a bar ... really... that is the official story and I stand by it. In any event, most of my friends drank Cuba libre (Coke and Rum) and I drank tequila. Back then tequila was a poor man's drink, so I was not well seen in those cantinas. Every time I asked for a tequila they looked at me as if I was asking for charity or something. There were no choices: tequila was one (Cuervo) and it was white. It is important to clarify that I drank tequila because I was cheap...it just happened that I liked it.

35 years later tequila has become a big deal, almost a fad. There are thousands of brands (really!) and the price goes from $15 US a bottle to $500 US a bottle. When I go to a restaurant (the wife does not approve cantinas even though I met her in one...but that is another story) and ask for a tequila... they bring this elegant cart with at least two dozen kinds of tequila... your pocket is the limit.

As tequila became so successful, those guys in Oaxaca were about to go to war against Jalisco, who produce most of the world's tequila. In Oaxaca they drink mezcal... and if tequila was a poor man's drink, then mezcal was for those "teporochitos" (drunken men wandering the streets). It was the lowest of the low. But... now mezcal has moved up to the high realms of tequila and there are also hundreds of brands and the prices and quality mimic the tequila's.

In a future post I'll explain the differences between the two beverages but for now, I share my super successful shrimp with mezcal recipe. I really really liked it. The consistency and flavor of the shrimp was out of this world. So far this Sous Vide machine is more than I expected.... 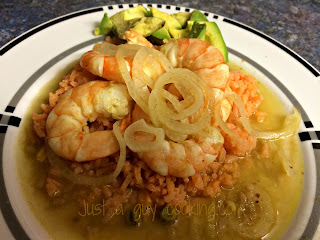 zest and juice of 1 lime

2 tsp Ground cumin (fresh if you can)

2. In a ziplock bag (large size) combine all the ingredients and seal the bag doing the water immersion method and place it in the already heated water bath.

3. Set the time for 30 minutes
4. When the timer goes off, remove the bag from the water and divide the contents in 4 portions (juice and all).

5. Add 1 Tbsp of Mezcal for each portion at the very end… to give it a kick.

6. Serve on a rice bed (I did it on a Mexican style rice), add the avocado slices and serve.

* If you don’t have Mezcal use Tequila. The main difference is that the Mezcal will give a smoky flavor to the dish whereas tequila won’t.

...and for the so-called cousin of mine who is living in the XII Century... please you try the recipe on a Pressure Cooker. See what happens cheapo!
Posted by Unknown at 4:21 PM