I was watching the other day with the current wife a new Netflix show called Chef's Table and I was watching Massimo Bottura's episode. Watching this episode confirmed two things: one...I can't afford to eat an any of the restaurants featured in the show and... I'm not ready to go full blast to spend what I don't have and eat at any of these restaurants as they are more expensive than training a new wife.

Based on that I decided that it was about time to prepare another fresh hand made pasta dish. I do love hand made pasta and I am convinced that there is nothing like it. It is a labor intensive process but with the help of my Cousinart attachment for pasta making and some patience, I just went for it. This time I tried Mario Batali's recipe for the pasta (and please don't tell me that is soooooo easy to make home made pasta and that one doesn't need a recipe because I just don't believe so). It was an egg pasta recipe and yielded enough for two occasions.

The Cherry Tomato Sauce is from a book I really like called Donna Hay Instant Cook (even though I did the pasta and I still don't qualify as a cook... ). The end result is absolutely fantastic, honest. You should try it even if you go and buy store bough pasta. You will feel that eating this pasta is like watching leaves fall in Autumn. Is that good.

Home made pasta is something close to my heart. The woman who claimed to be my mother (remember...no father as I was conceived by an Alien abduction event or something like that). That woman used to slave herself almost all Sundays to have for dinner my favorite aunt (actually my only aunt) and her companion, a super nice guy who worked in TV doing a show with a mouse... for a living -fact-. Those evenings were fantastic. I was sent to the "Club" (a Christian Priest Factory called Vanguardia in the Colonia Roma) while she was the official Chef. Dinner was always an entree, some sort of pasta and... dessert. Dinner was always fun and after dessert I was sent back to the Vanguardia place to watch a two-for-one movie show that included "almost just released" movies like Ben-Hur, The Great Train Robbery -the 1903 one- or Santo vs Las Momias... the Mexican twist to horror movies.

I did not became a priest (but it did cross my mind and it was motive of long chats with my mom who saw me as the next Pope), nor a Chef... but I manage to learn how to cook...today Spaghetti with Cherry Tomato Sauce... imagine.

For the Hand Made Pasta*: 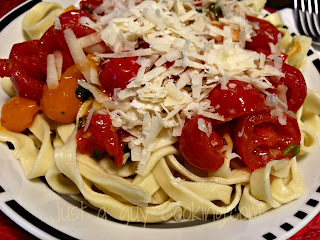 1. In your mixer bowl combine the sifted flour and the eggs and mix it at speed number 2 until combined. You might need 1 tablespoon of water to make it manageable (or two…) . You will get a sticky dough that is ready to be kneaded.

2. Flour a clean surface and start kneading the dough, using primarily your hands. Once the dough is a cohesive mass, set it aside and scrape the work surface so we don’t have any bits of dry dough.

3. Lightly flour the surface and continue kneading for 10 minutes, dusting with flour when necessary. The dough should be elastic and a bit (just a bit) sticky. Wrap the dough in plastic and allow it to rest -room temperature- for 30 minutes.

5. Once the time has passed, start rolling the pasta according to your own pasta maker’s instructions (there are some manual, some electric and some people use the II Century system and do it all the way by hand… your choice).

6. While the pasta is resting, put water to boil in a large bowl. This will be where we cook the actual pasta. Some people like to add salt and some oil to the water… I don’t but it is up to you.  Keep the water boiling while we do the sauce.

To cook the Sauce: 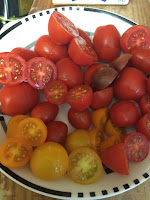 Place a large frying pan over high heat, add the butter and the tomatoes, making sure that the cut side of the tomatoes is the one touching the pan surface. Cook for exactly 4 minutes. Do not add salt!!!!!!

2. Put the pasta to boil. It should take about 5 minutes or less to be ready (home made pasta cooks way faster than store bought). Keep an eye on it so it doesn’t overcook.

3. By now the tomatoes are golden, so you can jus quickly stir for a minute or so and add the olive oil, garlic and the basil. Stir to combine.

The pasta should be ready and drained. Add the pasta to our frying pan where we have the sauce and 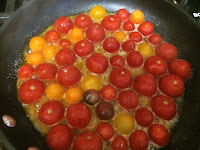 2. Serve and top with tones of freshly grated Parmesan Cheese.