Here Winter still looms even though the Spring wants to push it out. Some days it rains and some other rains too. The current wife leaves home early (somebody has to work, right?) and the days I am not teaching or writing...I cook. Usually this kind of weather calls for nice cozy food. Somehow I recall from my childhood this kind of dish...simple to put together but a bit time consuming when preparing. I would assume that the woman who enjoyed calling me son did some sort of a similar dish but without the Mexican flavor. Most likely I will guess it had more of a Chilean flavor.

This year I have decided to bring back the old ways as I am kind of sick and tired of this fat free, gluten free, sugar free and flavor free times. Also food is getting quite expensive so creativity is an important part of the deal. This time around I decided it was time to bring back the beef-pork ground meat mixture and, I have to say...the result is fantastic.

When the wife came back I have left a note asking her to turn on the oven at certain time and start baking the casserole once the oven was temperature ready, so when I was to come back from teaching (one of my few night classes I teach)...food was to be almost ready. When I came back, the wife was on the phone with la suegra (mother in law)....the casserole was where I left it, along with the note, and the oven was as cold as the weather outside. So much for bringing the old time costumes back. Fail.

In any event, understanding husband as I am...I did as the note explained...then the wife showed up to say that she didn't see the note (big orange post-it on the door where she gets in....). I sight and looked at her with the most loving look I have. Sooner than later dinner was ready and ...it was great. Honestly great.

So, if you want to bring back the old times, try this recipe, just avoid the wife part. The food will bring great memories and will warm up your heart. 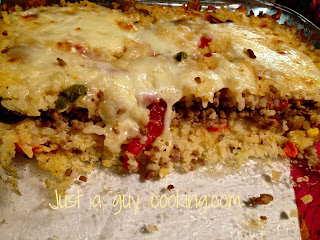 For the sauté mushrooms

For the Ground Meat

For building the Casserole