If you go to Spain, they call them Tostadas de Crema and they are part of the Carnival food, which is fantastic. The Carnival is celebrated to commemorate the arrival of Easter and it is when people use costumes, there is music and food, food and more food. Or that is what they say, as I have never been to Spain (but it is in my bucket list). Obviously the dessert is also eaten in Mexico, but there they call it Leche frita (literally fried milk) and it is served in many spaniard restaurants and some traditional Mexican restaurants they serve it too, claiming that it is a Mexican dessert. I honestly can't see how this would be a Mexican dessert as before the Spanish Invasion there were no cows in Mexico. Go figure.

In any event, it is a fantastic dessert to make and a crowd pleaser (who doesn't like fried food?...I already talked about it not long time ago). They serve it warm and it is delicious. The current wife who claims to be Mexican and that she comes from a long line of Mexican people going all the way to Quetzalcoatl. I have to admit, when she gets upset she does look like a feathered snake with red eyes and about to eat you, so I believe...well, she had never tried this dessert, so proudly I had a chance to show her something Mexican that she had never eaten. Ha!

This is a great dessert. It really doesn't take that much time, but it takes...muscle. Stir and stir and stir... but, at the end, the result is so tasty that you don't care (and gives you an opportunity to complain which can be good to your marital relations...looking for sympathy). Try and see... 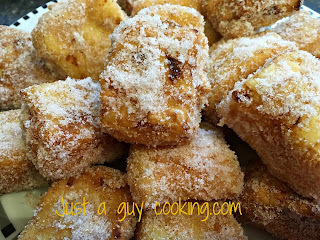 -The peel of half a lime or lemon

1. Using 100 ml of the milk, we’ll mix the corn starch with the little bit of milk that should be  cold, so is easy to mix. Reserve 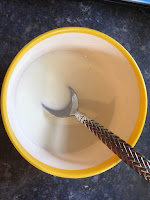 2. Ina medium size pan, over high heat, warm the milk but do not reach  boiling point, adding the cinnamon sticks and the lime peel. Keep it in medium heat for 10 to 15 minutes so the flavor of the lime and the cinnamon is absorbed by the milk. Turn off the heat and reserve.

3. In a medium size bowl mix the egg yolks with the sugar (mix for about 5 minutes so the sugar is 100% dissolved). Reserve

4. Place the bowl with the egg yolks-sugar mix on top of a pan with some water and warm it up using medium heat. Once is lukewarm add the milk with the cinnamon stick and the lime peel, in batches, stirring often so it incorporates to the egg mix. Once all milk has been incorporated to the egg yolks, keep stirring at 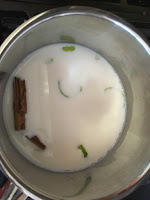 6. Butter a glass (or metal) square pyrex baking dish, making sure that the bottom and the sides are perfectly buttered. Pour the mix, flatten with a metal spoon, cover with plastic film and put in the fridge for 3 hours, so the custard hardens a bit. 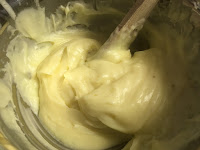 7. Now we are going to start our frying process. Mix the two eggs in a small bowl until incorporated and reserve. Fill with flour a second small bowl and reserve and start heating the oil (or the oil-butter mix). The difference will be in the flavor and the butter-oil mix will get you a crispier dessert. Keep it hot (frying temperature) and reserve. 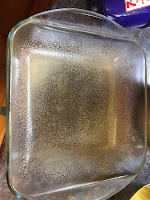 8. Cut in small squares (about 2” x 2” or so) the custard with a knife. Now we’ll start the frying part: cover in flour each square and then cover in the egg mix and very carefully start frying three or four at the time, turning them once when the bottom starts to brown. Once they are golden all over, put them on a paper towel to get rid of the excess oil. Reserve

9. In a medium bowl mix the sugar and the powdered cinnamon. Dip each square into the mix (cover them perfectly) and serve them warm.

b) If you have leftovers, put them in the fridge and cover with plastic wrap. They will release some juice…it doesn’t matter. Once you are about to eat them, put them in the toaster-oven and bake at 375˚F for 10 to 15 minutes, then cover them again in the sugar-cinnamon mix and serve.

c) If you have a heavy bottom pan, you can heat up the mix if you stir often so the custard doesn’t stick to the bottom. This is the method I use (less to wash, though) 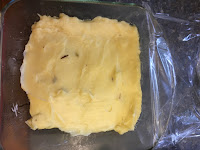 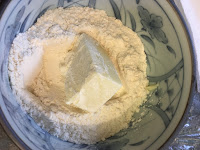 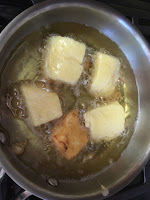