In my pursue of happiness and trying to recreate Salvo Moltalbano's favorite dishes, this time I decided to try this "encapsulated" pasta dish that originally was baked on embers that were placed on top and bottom of the cast iron dish. Took me a while to get the sense of the true Sicilian dish and, as usual, the dish has very humble origins and can not get more Italian than this: eggplant, tomatoes, pasta and cheese.

I did my research and a lot of Italians serve it on a plate "unmounted" from the cast iron pan (like a dome)...but to do that I had to wait 10 or 15 minutes so the pasta would cool down and then unmold it. The problem here is: who in their right mind can wait THAT long to enjoy such a fantastic dish?
We didn't, buy hey...I do what I can.

Also I have seen some people that cook this dish using the eggplant as the base of the dish (is placed on the bottom and sides of the cast iron pan)...but the cubing method was more appealing to me.  The addition of the bacon also I saw in some recipes and considering that one must die of something I said...sure, let's add bacon to this dish!!! and the end result was incredible.

The current wife thought that the whole pan was for her, so a fight broke, but at the end we both ended eating and sharing (me with some bruises).

Again...one of my two favorite Italian detectives have given me a great time and a superb dish. Sometimes is Brunetti and sometimes is Montalbano. Considering that I like Star Wars (their food looks awful), Game of Thrones (raw meat anyone?) and House of Cards (Southern ribs...), well...my Italian friends have advantage. They solve crimes and eat...I eat avoiding a crime (I stay alive from this food grabbing fights with the current wife) 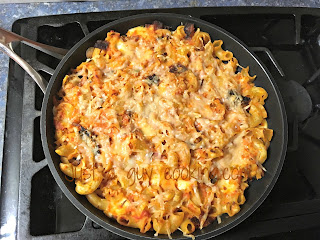 500 g Maccheroncini or Macaroni pasta as dictated by tradition from Messina.

1. Cut the eggplant into cubes (about 1”  inch) and put the cubes in salt water in a colander and leave  for about 50/60 minutes.

2. Rinse in water the eggplant cubes to remove excess salt and dry them by putting them in a cloth. Leave them to dry for about 1/2 hour to get them a bit dry.

3.  In a medium size pan, on medium heat, put the 2 tbsp of olive oil to fry them. When they look a bit brown (light brown!) place the egg plant on a paper towel to get rid of the excess oil -NOTE: the egg plant will absorb quite a bit of the olive oil so leave it on the paper towels for a while, otherwise the dish will be greasy-. Reserve

4. Now, let’s prepare the tomato sauce: In a medium size pan, medium heat, caramelize the onion until it gets a bit translucent, add the stewed tomatoes (I used a can of stewed tomatoes as the tomato season is gone) , the basil and the oregano to taste and lower the heat to simmer. Cover and let it simmer for 20 minutes.

5. While the tomato sauce cooks, let’s prepare the bacon, if you decided to use it -not in the original recipe from way back , though- to leave it crispy. Place in paper towel to absorb the excess oil. Reserve

6. To save you time, while the sauce is simmering, in a large pot with boiling water cook the pasta (I never add salt nor olive oil to the pot where I cook the pasta…). Cook until is al dente, drain and reserve.

7. Time to put it all together: pour the pasta in a large bowl, add the mozzarella cheese and 100 grams of grated parmesan cheese, the cubed eggplant and the bacon. Add the sauce and mix until everything is incorporated. The idea here is to allow the cheeses to melt on the warm tomato sauce. This is not a layered pasta dish: all must be combined before the final step.

REMEMBER that the dish 'ncasciata has a single layer - is what differentiates it from the traditional Italian oven baked pasta - so the first step is to cook the entire mixture in a bowl and not doing layers.

9. Final stage: put the ‘ncasciata dish mix into a cast iron pan (or a dutch oven), top it with the other 100 grams of grated parmesan cheese (we want a crust) and bake for15 minutes. Once it looks “crusty” then the dish is ready to be eaten right away.

*According to tradition, the 'ncasciata is baked  directly in the pot with a layer of embers underneath and another layer on top of the lid. If you feel mega traditional go for it…I use the oven. Actually ‘ncasciata means “encased”

This is where the dish takes its name: the cooking on coal embers  is one of many the traditional Sicilian ways of preparing pasta. In this case the name comes from 'u ncaçio’ (in embers)
Posted by Unknown at 3:02 PM