There is nothing that compares to Brownies. Somehow people just love them and...they are not that difficult to make. I bake brownies more than other cakes as the current wife absolutely loves them. Usually I don't even take them out of the oven when she already started eating them !!

Also..when talking about ice cream, who doesn't love Ben and Jerry's Cherry Garcia? I could just buy the ice cream and put it next to a piece of brownie and...it will be a success, no doubt. Instead I decided to try something I saw (sorry I don't remember where) and I tried to do it: Cherry Garcia Brownies!!!

The Brownie recipe is from Tom Douglas book and I think is one of the best brownies recipe I know..next to Gu's and Bea's.

So..the experiment worked out. The top was not as I wanted as in my head I thought it would end being white with the red cherry accent..instead I got this brownish top which doesn't look as great but...wow...the flavor is incredible. Try it !!!

3/4 Cup unsalted butter, cut into chunks, plus more for the pan 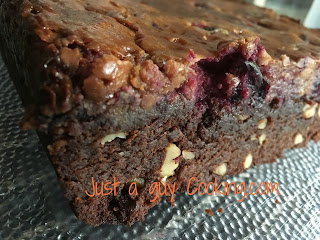 2. Butter the pan, then line the pan with a 9-in-wide strip of parchment paper that fits the bottom of the pan and up 2 of the sides with a little overhang. Butter the paper

3. Melt butter and chocolate in a double broiler, (do not let the water boil!) and stir mixture to combine using a rubber or silicone spatula. Reserve

4. Put the flour, baking powder, and salt in a bowl and use a whisk to combine. Reserve

5. In a large bowl (third bowl!!), whisk the sugar, eggs, and vanilla extract together until smooth and add the chocolate -butter mixture and whisk again until smooth. Add the dry ingredients to the chocolate-egg mixture, folding with a rubber spatula until well combined.Fold in the cup of the pecans

6. Pour the batter into the prepared pan, smoothing the top with the rubber spatula.
THE BROWNIE PART IS READY, now the Cherry Garcia Top…

7. In a medium size bowl, beat cream cheese, vanilla, egg, and sugar with an electric mixer until light and fluffy. Stir in the cherries and chocolate chips.

8. Pour brownie batter into the prepared baking dish. Dollop the cream cheese-cherry mixture over the brownie layer, then run a knife through mixture and batter to create a swirled effect.

9. Bake until the top looks dry and a skewer inserted into the brownies comes out mostly clean with a few crumbs clinging and maybe just a small streak of batter, between 40 to 60 minutes rotating the pan halfway through the baking time

10. Remove the pan from the oven and cool on a wire rack for at least an hour (two or three is better)  before unfolding. (don’t panic! the brownies will be soft when they are warm but will set up as they cool.)

11. To unfold the brownies, run a small knife along the 2 sides of the pan that are not lined with parchment paper, then unmold.

Posted by Unknown at 6:04 PM No comments:

So, I am trying to come back to my "regular life" which is not as easy as it sounds. We had a mega rainy Spring which gave us a Mega Clean up in the garden, plus some issues with my health, plus the current wife who is always a workload.

I don't think I can post as  regular as I did before (I know...) but at least I am back. Summer is great for me because I can cook with more time as the lucky one is the one that works (in the mines..) all day long.

This is a super easy recipe to cook with a 100% success rate. Somehow people nowadays just don't eat tons of great food that is available to us so the price is quite economic and the quality is great. That is the case for chicken tights...can not get another part of a chicken for that price...

You prepare in the morning...allow it to seat in the fridge until one hour prior to dinner time. Then just put it in the oven and 45 minutes later you have a great dinner. I did this batch this week and I cooked some parmesan potatoes to accompany...it was fantastic!!! 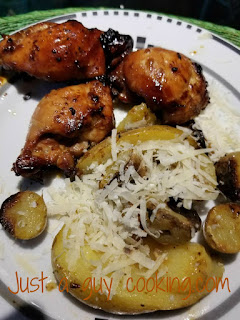 2 Rinse and trim off all of the fat from the chicken, then place it in the bowl with the marinade. Allow it to rest for 1 hour or so (the longer the better).

3 Preheat the oven to 425F when ready to start the final stage.

4 Place chicken thighs and marinade on a cast iron or baking dish and bake for 45 minutes, make sure to flip the chicken on the other side few times, that way the chicken will be juicy & tender without dry top.

5 Garnish with chopped parsley, serve with rice or mashed potato, and make sure to pour the sauce over the chicken when serving.

Posted by Unknown at 3:03 PM No comments: