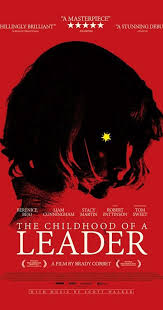 Besides cooking, I have other hobbies like watching movies. I have been watching movies since I was a tween. I never stopped watching and still I do, Just not that much at the movie theatre but on DVDs or Netflix.

I have decided to share from now my views on what I have watched recently..and my first one to review -more like comment, really- is Brady Corbet's Childhood of a Leader.  This mega young film director shines in his approach to the roots of a dictator. You could say that the movie is based on Sartre's short story..which probably is..but his approach exploring the origins and reasons for a ruthless dictator to do, well, what they do.

Honestly we know the names and worst actions of some dictators but really we never stop to think: where this guy came from?, that is, not the rise and fall of this kind of addicted to power people -if we can call them that-. I can't imagine a happy childhood of Franco, Hitler, Hasina, Stalin, just to name a few. I don't think we should blame their parents because that would be unfair as an individual has his own personality regardless. The movie explores that: the result of a bad mix: parenthood, growing up environment and, most important of all..their own personality.

Prescott is a 10 year old kid that on his own is a petulant psychopath and well.. the environment where he grows is the proper media to become a dictator.

The movie moves fast, the acting is fantastic and the script is riveting. I enjoyed it a lot and it has been stock in my head since I watched.

If yo care for intelligent storytelling this movie should be on your list.
Posted by Unknown at 1:47 PM