Some things are just great from scratch and this Peruvian recipe is so so tasty. It is not a 5 minute soup by far and it does need more ingredients than most soups BUT the end result is fantastic.

While I was listening to Vangelis' 1942 Soundtrack, which on its own is sublime music I was cooking this Peruvian dish.

This is a slow, take your time soup, because at the end great food needs time. Chupe is a staple in Peru's picanterias. I was reading that most people can do ceviche but Chupe is another level that can only be mastered by some. I won't say I have mastered it but..wow...this was a delicious and fantastic dish. The soup dates from the early 1900s and is not an every day soup. It is a weekend soup because it requires peace, tranquility and, most important, it fills the air with an unforgettable aroma that will be in your memory for ever..

Legend says that in the Inca era, when the sons of the main warriors achieved puberty they were to fast in order to withstand war . During those 15 days the young guys could only eat bollos (bread made of maiz) and water.


Once they completed the test, beautiful women would come to pick up one of them at the time and offer them a mix of tomato, aji, huatacay and other spices for the guy to lick from...well..from...well..I don't remember from where but what I know is that the licking part was called chupe. Once this was done and they convinced the boys that they had to give a chance to other men to do the same..they were named warriors.

I'm not a warrior and the one who claims to be my son is far from be one, so I did the soup and the only body part that one could lick was..the fingers. Well...don't say I dd not try... 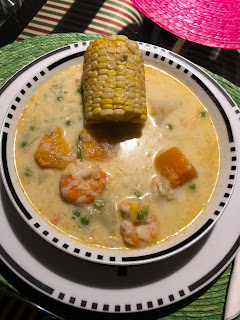 Cooking Instructions
1.In a large pot (I mean..large like the one used to cook pasta in) and heat over medium heat the oil. Once is hot, add the shrimp (wash it first) and add 1 teaspoon of salt. Cook stirring frequently until the shrimp are pink and firm, about 7 minutes or so. Remove with a slotted spoon, set aside and allow to cool. Once they are cool, remove the heads and peel. Reserve.

2.Add to the pot the onion, paprika, cumin and another teaspoon of salt. Cook  for about 5 to 7 minutes until the onions are translucent. Add the squash, the potatoes, the corn and the water. Cover and bring to a boil, then reduce the heat to simmer, partially covered, until the potatoes are tender -but not soft!-, between 12 to 15 minutes.

3.Add the cream and simmer for another 20 minutes, then stir in the shrimp and the last teaspoon of salt (I added INSTEAD a knorr Onion-cilantro cube- and the frozen peas. Cook until the shrimp are just heated through, about 5 minutes.

* Adaptation from Food and Wine Magazine’s Quick From Scratch soups and salads cookbook. 2004